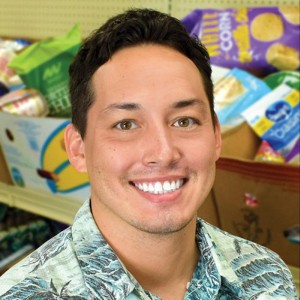 Marcus Mariota reveals his passion beyond the game by wearing his heart on his feet for Hawai‘i’s hungry keiki.

When it comes to athletes from Hawai‘i, Marcus Mariota’s accolades are second to none. The Honolulu-born quarterback has been wowing crowds with his athleticism for decades, and it was clear from an early age that he was something special.

Marcus attended Saint Louis School and was a two-sport all-star in football and track. In his senior year, he led the Crusaders to a state title while being named the Interscholastic League of Honolulu’s Offensive Player of the Year.

Marcus went on to play football for the University of Oregon, where he would be rocket-strapped to a whole new level of stardom. After redshirting his first year, he became the first freshman quarterback to start a season opener for the Ducks in more than 20 seasons. With a 12-1 record, his freshman campaign earned him Pac-12 All-Conference first-team honors as well as the Pac-12 Freshman Offensive Player of the Year award. The following season, he led the Ducks to 11 wins and was once again named Pac-12 All-Conference first-team.

In his junior year, Marcus achieved many more firsts. After leading the nation in touchdowns, passing efficiency and total offense, he was awarded the prestigious Heisman trophy award — recognizing him as the most outstanding college football player of the year. Marcus became the first Oregon Duck, the first Polynesian and the first Hawai‘i-born athlete to achieve this honor. By the time he finished his career at Oregon, he had become the most decorated player in school history.

Marcus entered the 2015 NFL Draft and was selected with the second overall pick. Since then, he has played a number of successful seasons with the Tennessee Titans and, currently, the Las Vegas Raiders.

I’ve been very blessed to be put in a position to help, and I think that is a responsibility of mine.

Throughout his career, the versatile quarterback has become known for his speed and evasiveness on the field. Off the field, however, Marcus does not shy away from interacting with others — especially when it comes to taking care of his home. His compassion extends wide, and, just as he displayed signs of athletic prowess at an early age, he also flashed an early affinity for giving back.

“My dream of playing in the NFL began at an early age in elementary school. At the same time, I also began dreaming of giving back someday and helping young kids,” writes Marcus on his website. “This is why it was important to me to start the Motiv8 Foundation.”

In 2015, he established the Motiv8 Foundation along with his parents Alana and Toa. The organization works to provide athletic, educational and economic opportunities to local keiki while also offering safety and support to Hawai‘i’s homeless populations.

“The goal and mission of Motiv8 is exactly what our name says — to motivate young people to dream big through education and athletics,” explains Marcus. “Playing in the NFL is a privilege and has responsibilities. We, as professional athletes, have a platform to help our youth for a better tomorrow. The Motiv8 Foundation is a vehicle to give back and help others, and I have a lifetime commitment to that mission and helping as many young people as possible.”

Marcus works steadfastly towards this ideal, and he finds a variety of ways to reach youth and cultivate their nourishment each year. His commitment is unwavering — even when COVID-19 changed everything last year.

When news spread that schools back home were closing down in response to the pandemic, he immediately jumped in to help make sure students received the nutrition they need. Marcus and the Motiv8 Foundation worked with the community to provide thousands of grab-and-go meals at Kauluwela and Pālolo Elementary Schools. They also provided more than 5,000 meals at shelters in May and an additional 3,500 meals during the holidays.

Marcus reflects, “I’ve been very blessed to be put in a position to help, and I think that is a responsibility of mine.”

It’s a responsibility that goes deep.

During the 2020 NFL season, Marcus decided to wear his heart on his feet by spotlighting Hawai‘i Foodbank through the NFL’s My Cause My Cleats initiative — bringing national attention to the 1 in 4 keiki in Hawai‘i struggling with hunger during the pandemic.

“I was very pleased to partner with Hawai‘i Foodbank this year with the My Cause My Cleats game shoes,” says Marcus. “The Foodbank is meeting the needs of families that have been hit hard by this pandemic. Many of our local families are suffering during these tough times and are worried about their next meal. The Foodbank is doing a great job to help these families and meet their needs, and that is why they have my support.”

Many of our local families are suffering during these tough times and are worried about their next meal. The Foodbank is doing a great job to help these families and meet their needs, and that is why they have my support.

After the season, Marcus took it one step further by hosting an online auction to gather additional support for Hawai‘i’s hungry keiki and families. The auction featured his game-worn cleats from the Raiders’ week 13 victory against the Jets. All money raised was donated directly to Hawai‘i Foodbank, and Marcus personally matched the winning bid — altogether providing food for more than 10,000 meals.

For years, Marcus has been wowing folks back home with a long list of accomplishments. State champion, All-Conference awardee, Offensive Player of the Year, Heisman Trophy winner, NFL starter — all accolades worth admiring. But to the people of Hawai‘i, there’s one title that is second to none when it comes to Marcus Mariota: a true torchbearer for Hawai‘i’s communities.

A Different Kind of Resolution

5 Food Waste Tips for the Holidays

In observance of Independence Day, our warehouses will be closed Monday, July 4. If you are in need of emergency food assistance, please call 2-1-1 for Aloha United Way.